Skip to content
Military manuals and soldier’s accounts from the time of the Civil War indicate that the company roll was to be called three times a day: at reveille (the first formation of the day), retreat (near sunset), and tattoo (9-9:30 p.m.). It is apparent that these roll-calls were viewed as military formations and it appears that there was a set routine followed for the calling of the roll. In order to better our military impression at events we will attempt a closer adherence to the available manuals of the period. 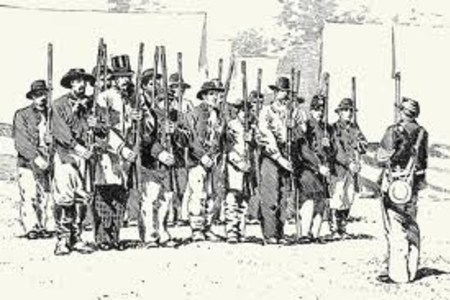 The most complete description of how roll-calls were undertaken can be found in August Kautz’s “Customs of Service”. He describes the routine as follows: At all roll calls the first sergeant takes his place six or eight paces, according as the company is small or large, in front of and opposite the center of his company, facing towards it. If the company is forming without arms, the men fall in and take the position of parade rest, and the first sergeant takes the same position. They should fall in in two ranks, whether with our without arms. With arms they fall in at a shoulder arms instead of at parade rest. The company is formed in the interval between the musician’s call and the last note of the assembly(reveille) when every man should be in ranks; and those who fall in afterwards should be punished for being late. When the music has ceased, the first sergeants commands, “Attention!” whereupon the company, if at parade rest, take the position of the solider, and if with arms, the sergeant adds, “Support arms.” The roll is then called, commencing with sergeants, Adams, Smith, &c., in the order of rank, until all are called; then “corporals, “Brown, Jones, &c., to “farriers;” then “buglers or musicians;” and finally “privates,” Ames, Brown, Cox &c., in alphabetical order. As each names is called, they answer, “Here;” and if with arms at a support they come to a “shoulder” and finally to “order arms,” immediately on answering to their names” After the roll has been called, the first sergeant turns to the officer superintending the roll call, and reports the absentees by name. If none are absent without proper authority, he reports, “All present or accounted for.” If the officer should then take command of the company, the first sergeant takes his post on the right of the company, and acts as right guide.

If you are wondering, yes “Customs of Service” is a federal manual. Unfortunately, Gilham’s Manual does not specify how a roll call was to be conducted. However, if you read Gilham’s description of a muster you will notice not so subtle similarities between Kautz’s Roll Call and Gilham’s muster. These similarities include how each soldier was to answer his name (“Here”) and what he was to do with his musket immediately afterwards. Given the similarities between these two manuals on a closely related subject, and because “Customs of Service” may be the only Civil War period manual that contains an in depth description of how a roll-call was to be conducted, it would seem that the use of Kautz’s roll-call is a safe choice for the SWB. I do not suggest that every roll-call conducted during the war was taken in the manner Kautz describes. Obviously there would be times when the men would be much fatigued from march or battle and a roll call in another less strict form would be instituted. On the other hand, it is apparent that the roll-call described by Kautz and referenced by other military publications of the period became an integral part of routine camp life. The use of Kautz’s system of roll-call will improve the military impression of the brigade while creating little or no increase in work for the men in the ranks.

Sources: Gilham’s Manual for Volunteers and Militia Customs of Service for Non-Commissioned Officers and Soldiers