What follows are the most salient points of guard duty, tailored to the circumstances we most often encounter during reenacting events. When improperly executed, guard duty is tedious and boring, but when following the period requirements, it can be a memorable part of your impression of a soldier of the 1860s. For anyone really interested in the intricacies of guard duty, I recommend Instructions for Officers and Non-Commissioned Officers on Outpost and Patrol Duty and Troops in Campaign (1863).

Types of Guards
The guard system used during the Civil War was designed to serve a variety of purposes, ranging from maintaining internal camp discipline to preventing a surprise attack from the enemy. As such, the system as structured around layers of guards. Just outside of the sight of the enemy, a line of outposts of a few men would be posted. These outposts send forward guards to directly observe the enemy, called sentinels if composed of infantry or vedettes if composed of cavalry. Behind this line of outposts and sentinels, a line of grand guards provides support to slow the enemy if he should attack. These grand guards are in turn supported by a line of pickets, which consist of 40 men commanded by a lieutenant. Their purpose is to hold the enemy until the main body of troops has time to form up. The camp of the main body lies behind the pickets and a group of police guards surround the camp of each regiment and are posted at important points within the camp. 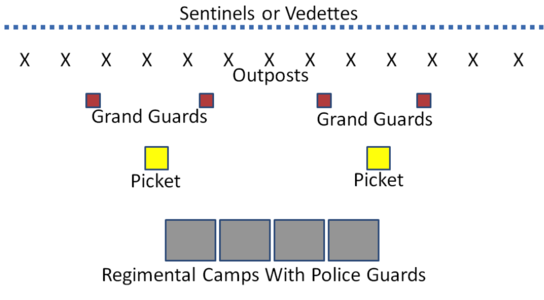 It is very rare to see a reenactment which attempts to maintain a line of pickets, grand guards, etc… due to the manpower required. In most cases, when we conduct guard duty during an event, we are portraying police guards. The remainder of this primer will discuss police guards.

Composition and Duties of the Police Guard

Per regulations, the Police Guard consists of the following personnel: 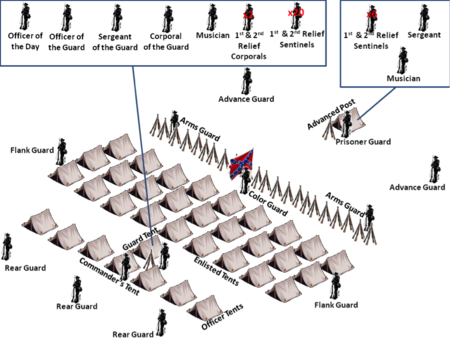 In reenacting, a guard will more commonly consist of the OOD, a Corporal of the Guard, and sentinels. If less than thirteen men at a time are available to serve as sentinels, priority should be placed on posting guards at the Guard Tent, the colors/arms, and at least one sentinel on each flank and to the rear and advance of the Battalion.

Rules Governing the Conduct of Sentinels and Their Duties
Sentinels take orders only from the OOG, OOD, Sergeant of the Guard, or the Battalion commander. Unless ordered to march over a particular stretch of ground (“walking a beat”), sentinels may not leave their appointed position for any reason. Likewise, a sentinel must never ground or allow anyone to touch his weapon and should carry it on either shoulder.

When posted, sentinels should be provided with the orders and regulations they are tasked to enforce. All sentinels have the following general orders:

“I am required to take charge of this post and all public property in view; to salute all officers passing, according to rank; to give the alarm in case of fire, or the approach of the enemy, or any disturbance whatsoever; to report all violations of the Articles of War, Regulations of the Army, or camp or garrison orders; at night, to challenge all persons approaching my post, and to allow no one to pass without the countersign until they are examined by an officer or noncommissioned officer of the Guard.”

Additional responsibilities may be assigned based on the sentinel’s assigned post:

When required by his orders, a sentinel should sound the alarm by calling for the Corporal of the Guard as described above, making sure to state his post number. A sentinel may also sound the alarm by firing his weapon or yelling “Fire!” as the situation dictates.

Sentinels are to be respected by everyone, officers and enlisted. They are not allowed to converse except as part of their official duties. For additional details on the conduct of a sentinel, please see pages 28-39 of Customs of Service for Non-Commissioned Officers and Soldiers.

Honors
The guard, as the only group of men in the Battalion camp who are armed at all times, is responsible for rendering honors for general officers and other dignitaries. Since, as reeneactors, we rarely have a guard other than sentinels on duty, this primer will not cover many of these honors, as they involve the off duty sentinels be formed up. As we rarely maintain a guard of off duty sentinels, those interested in learning the procedures for these honors should consult pages 584-586 of Gilham’s Manual.

Sentinels halt and give the following honors at anytime between reveille and retreat:

At night, no honors are paid, except to the OOD, who may inspect the sentinels as part of Grand Rounds and upon whose approach, sentinels come to shouldered arms (see Challenging and Grand Rounds).

Guard Mount and Relieving Sentinels
Guard Mount is a daily review and parade between the guard of the previous day and the guard of the new day. As reenactors, we almost never conduct guard duty on 24 hour shifts and generally only provide men for the guard just prior to their guard duties rather than having the entire guard reviewed during a morning Guard Mount. The purpose of Guard Mount is to transfer authority from one OOD and one OOG to a new command team, as well as to inspect the new guard’s weapons. The full description can be found on pages 610-614 of Gilham’s Manual.

Sentinels are to be relieved by the Corporal of the Guard. The relief will march by the flank in two ranks at support arms. The Corporal of the Guard will designate the man in the first rank of the first file as No. 1, the man in the second rank of the first file No. 2, and so on. If the relief passes any officer, the corporal will order the men to come to shoulder arms until the officer is past. When a sentinel sees the relief approaching, he will halt and face the relief at shoulder arms. Approximately six paces from the sentinel, the Corporal will order:

The corporal will then designate the man to replace this sentinel and will order than man to come to arms port.

The column then proceeds to the next sentinel until all posts are relieved.

Challenging and Grand Rounds
Challenges are only given at night and are done by calling out “Who comes there?” and coming to arms port. After a challenge, the approaching party provides the countersign, a word given to officers and NCOs of the guard or other individuals authorized to leave the camp at night. Unlike the modern usage, there is no sign/countersign exchange, such as the famous “Thunder. Flash” sign/countersign used during the Normandy invasion in World War Two. Instead the countersign is a single word set by the OOD, and was historically the name of a battle. The following is the exchange as laid out in the manual:

Sentinel: Who comes there?
Approaching Party: Friends.
Sentinel: Halt, friends. Advance one with the countersign.

The countersign should never been spoken above a whisper. If the incorrect countersign is given, the sentinel should call for the Corporal of the Guard.

At night, the OOD will conduct Grand Rounds to inspect the sentinels and ensure they remain alert. He will travel with an NCO and two men. Upon being challenged by a sentinel, the NCO will answer “Grand Rounds!” The Sentinel will reply “Halt, Grand Rounds! Advance, Sergeant, with the Countersign!” The NCO then advances and provides the countersign. The sentinel will then state “Advance, rounds!” and stand at shoulder arms until they have passed.